One use of the integral calculus is to enable us to ascertain the values of areas bounded by curves.

Let us try to get at the subject bit by bit. 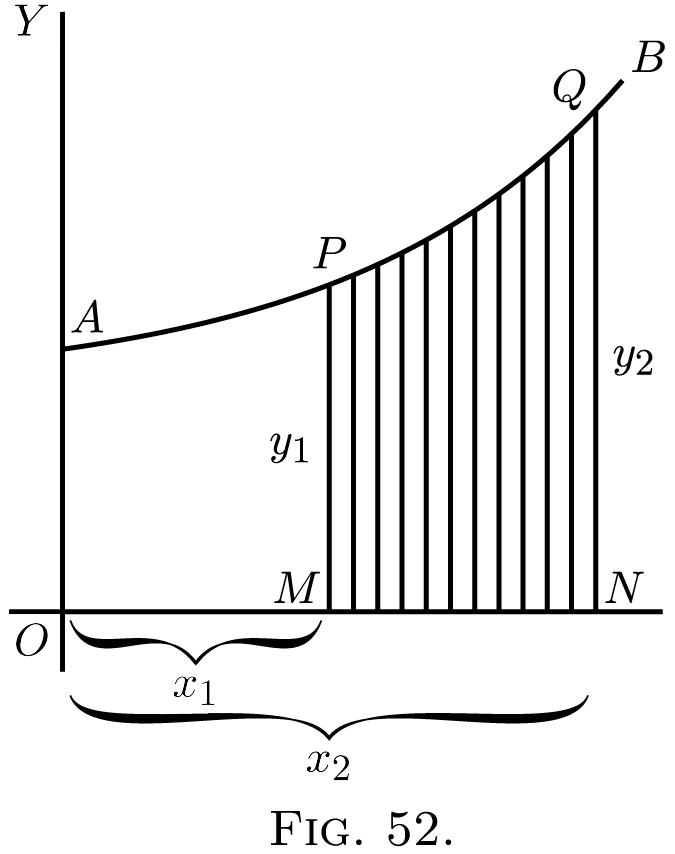 The secret of solving this problem is to conceive the area as being divided up into a lot of narrow strips, each of them being of the width \(dx\). The smaller we take \(dx\), the more of them there will be between \(x_1\) and \(x_2\). Now, the whole area is clearly equal to the sum of the areas of all such strips.

Our business will then be to discover an expression for the area of any one narrow strip, and to integrate it so as to add together all the strips. Now think of any one of the strips. It will be like this: being bounded between two vertical sides, with a flat bottom \(dx\), and with a slightly curved sloping top. Suppose we take its average height as being \(y\); then, as its width is \(dx\), its area will be \(y\, dx\). And seeing that we may take the width as narrow as we please, if we only take it narrow enough its average height will be the same as the height at the middle of it. Now let us call the unknown value of the whole area \(S\), meaning surface. The area of one strip will be simply a bit of the whole area, and may therefore be called \(dS\). So we may write \[\text{area of $1$ strip} = dS = y \cdot dx.\] If then we add up all the strips, we get \[\text{total area $S$} = \int dS = \int y\, dx.\]

That is all very well; but a little thought will show you that something more must be done. Because the area we are trying to find is not the area under the whole length of the curve, but only the area limited on the left by \(PM\), and on the right by \(QN\), it follows that we must do something to define our area between those ‘limits.’

This introduces us to a new notion, namely that of integrating between limits. We suppose \(x\) to vary, and for the present purpose we do not require any value of \(x\) below \(x_1\) (that is \(OM\)), nor any value of \(x\) above \(x_2\) (that is \(ON\)). When an integral is to be thus defined between two limits, we call the lower of the two values the inferior limit, and the upper value the superior limit. Any integral so limited we designate as a definite integral, by way of distinguishing it from a general integral to which no limits are assigned.

In the symbols which give instructions to integrate, the limits are marked by putting them at the top and bottom respectively of the sign of integration. Thus the instruction \[\int_{x=x_1}^{x=x_2} y \cdot dx\] will be read: find the integral of \(y \cdot dx\) between the inferior limit \(x_1\) and the superior limit \(x_2\).

Sometimes the thing is written more simply \[\int^{x_2}_{x_1} y \cdot dx.\] Well, but how do you find an integral between limits, when you have got these instructions?

All integration between limits requires the difference between two values to be thus found. Also note that, in making the subtraction the added constant \(C\) has disappeared.

Example 1
To familiarize ourselves with the process, let us take a case of which we know the answer beforehand. Let us find the area of the triangle (Fig. 53), which has base \(x = 12\) and height \(y = 4\). We know beforehand, from obvious mensuration, that the answer will come \(24\). 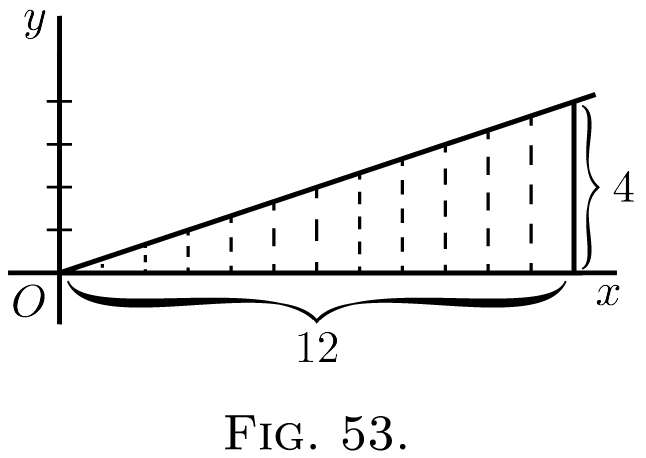 Let us satisfy ourselves about this rather surprising dodge of calculation, by testing it on a simple example. Get some squared paper, preferably some that is ruled in little squares of one-eighth inch or one-tenth inch each way. On this squared paper plot out the graph of the equation, \[y = \frac{x}{3}.\] 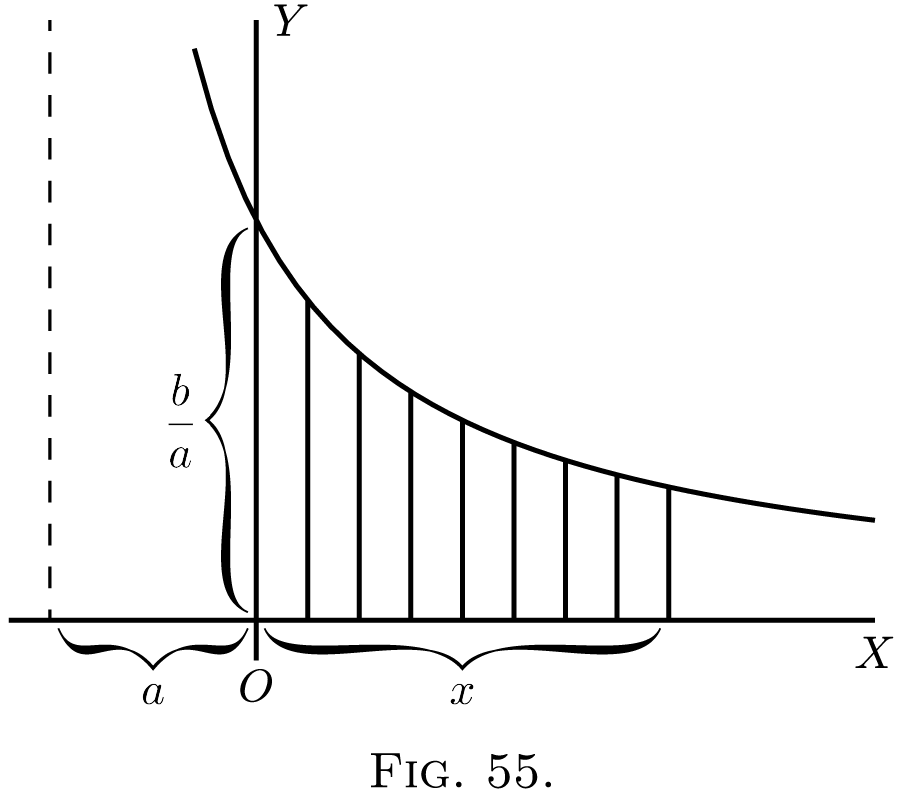 N.B.—Notice that in dealing with definite integrals the constant \(C\) always disappears by subtraction.

Let it be noted that this process of subtracting one part from a larger to find the difference is really a common practice. How do you find the area of a plane ring (Fig. 56), the outer radius of which is \(r_2\) and the inner radius is \(r_1\)? 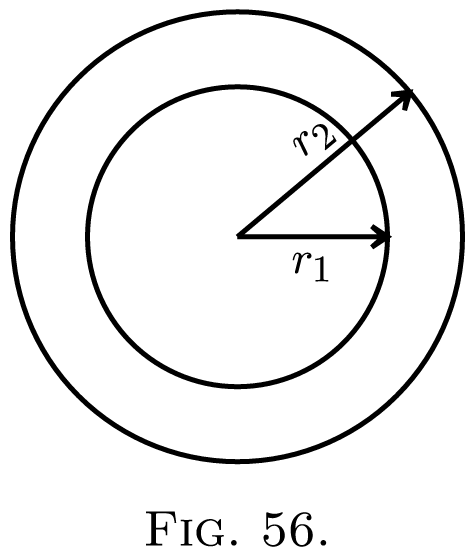 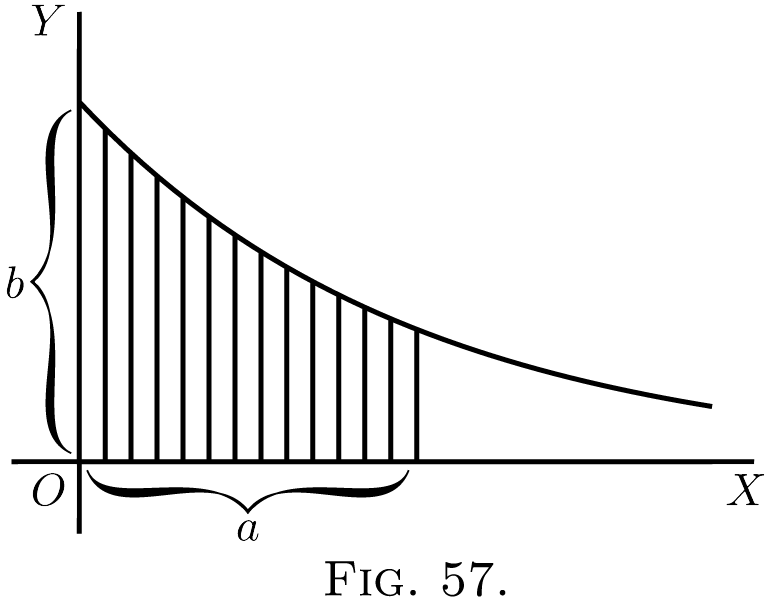 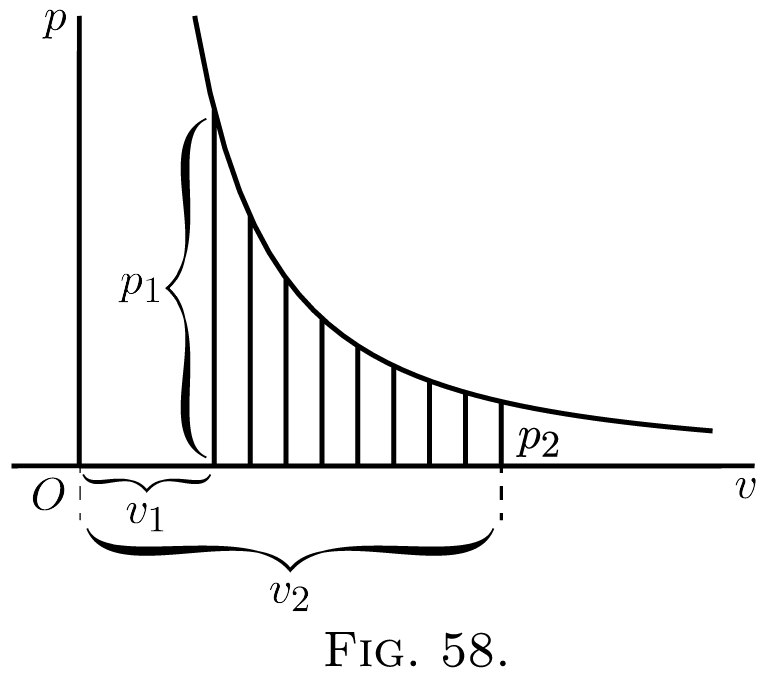 Find the area under the curve (which is proportional to the work done in suddenly compressing the gas) from volume \(v_2\) to volume \(v_1\).

Exercise
Prove the ordinary mensuration formula, that the area \(A\) of a circle whose radius is \(R\), is equal to \(\pi R^2\).
Solution
Consider an elementary zone or annulus of the surface (Fig. 59), of breadth \(dr\), situated at a distance \(r\) from the centre. We may consider the entire surface as consisting of such narrow zones, and the whole area \(A\) will simply be the integral of all such elementary zones from centre to margin, that is, integrated from \(r = 0\) to \(r = R\). 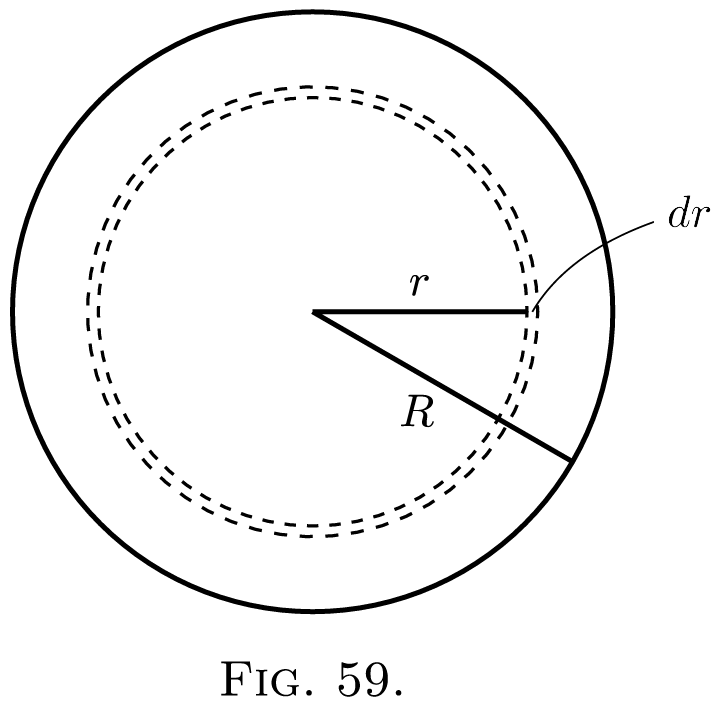 [N.B.—It will be a pretty and simple exercise in maxima and minima to find by differentiation what is the height of the maximum ordinate. It must be greater than the average.]

One can also find in the same way the surface area of a solid of revolution.

When the equation of the boundary of an area is given as a function of the distance \(r\) of a point of it from a fixed point \(O\) (see Fig. 61) called the pole, and of the angle which \(r\) makes with the positive horizontal direction \(OX\), the process just explained can be applied just as easily, with a small modification. Instead of a strip of area, we consider a small triangle \(OAB\), the angle at \(O\) being \(d\theta\), and we find the sum of all the little triangles making up the required area. 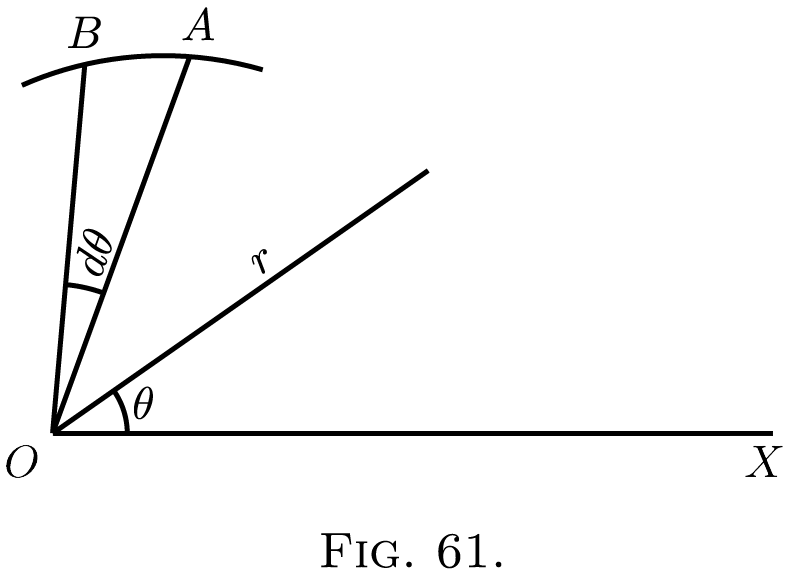 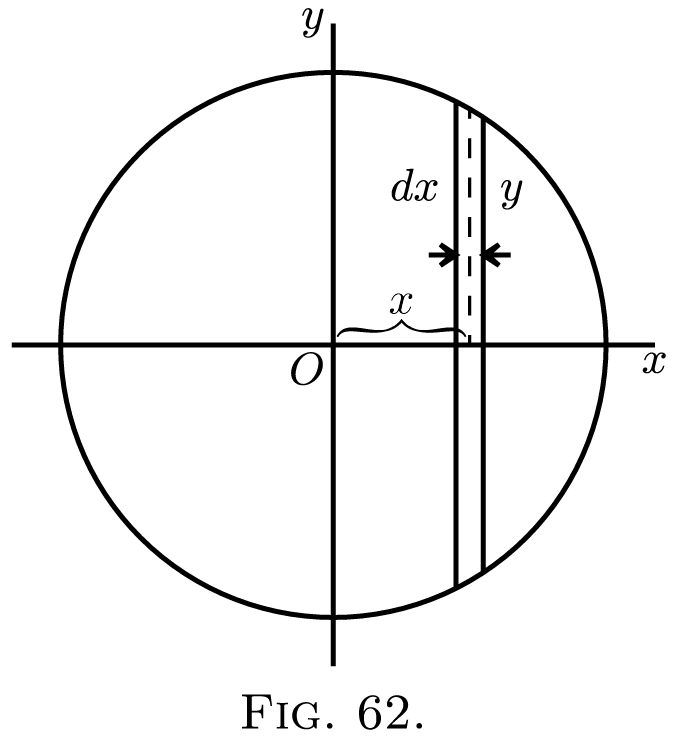 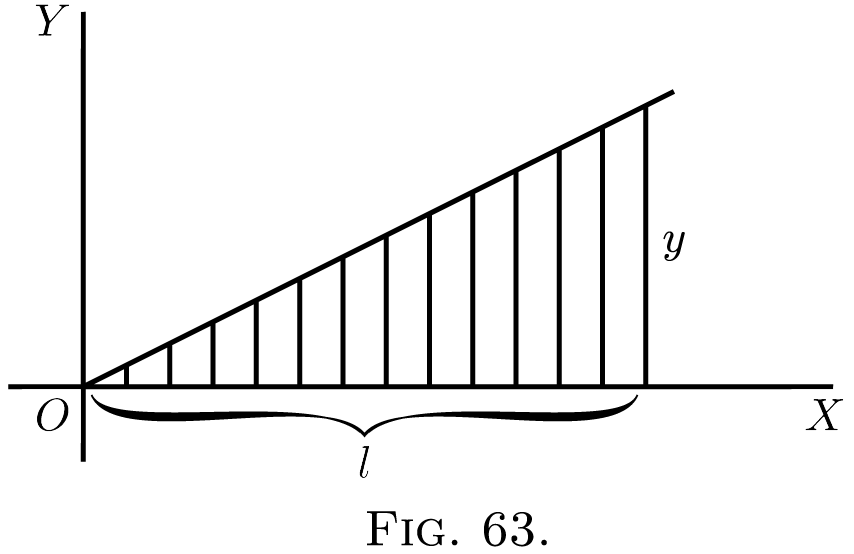 Example 2
To find the quadratic mean of the function \(y=x^a\).

(2} Find the area of the parabola $y=2a\sqrt x$ between $x=0$ and $x=a$. Show that it is two-thirds of the rectangle of the limiting ordinate and of its abscissa.

(3) Find the area of the positive portion of a sine curve and the mean ordinate.

(4) Find the area of the positive portion of the curve $y=\sin^2 x$, and find the mean ordinate.

(9) Find the volume generated by a sine curve revolving about the axis of~$x$. Find also the area of its surface.

(10) Find the area of the portion of the curve $xy=a$ included between $x=1$ and $x = a$. Find the mean ordinate between these limits.