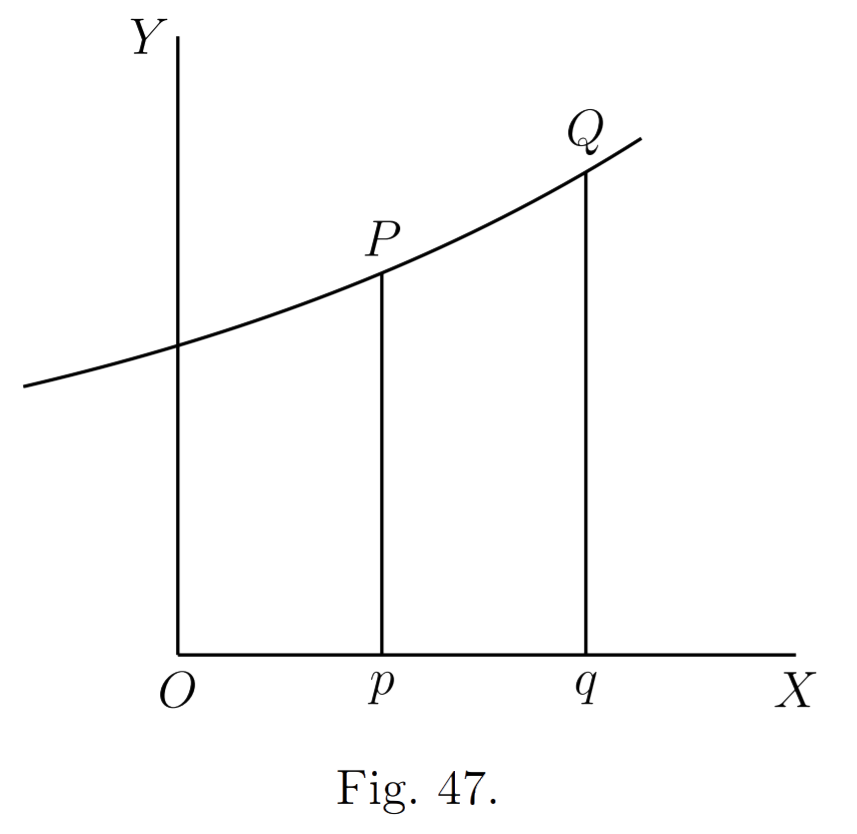 Making this assumption, we proved in § 145 that \(F'(x) = f(x)\), and we showed how this result might be used in the calculation of the areas of particular curves. But we have still to justify the fundamental assumption that there is such a number as the area \(F(x)\).

We know indeed what is meant by the area of a rectangle, and that it is measured by the product of its sides. Also the properties of triangles, parallelograms, and polygons proved by Euclid enable us to attach a definite meaning to the areas of such figures. But nothing which we know so far provides us with a direct definition of the area of a figure bounded by curved lines. We shall now show how to give a definition of \(F(x)\) which will enable us to prove its existence.1 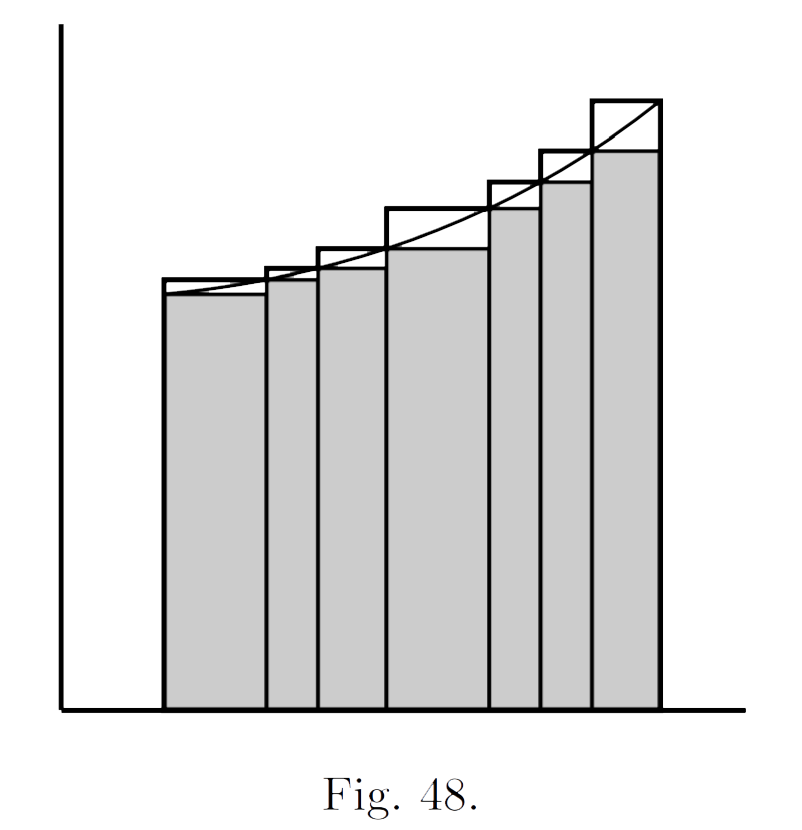 The expression on the right-hand side of this equation may then be regarded as being defined in either of two ways. We may regard it as simply an abbreviation for \(F(b) – F(a)\), where \(F(x)\) is some integral function of \(f(x)\), whether an actual formula expressing it is known or not; or we may regard it as the value of the area \(PpqQ\), as directly defined in § 156.

But when we are considering ‘indefinite integrals’ or ‘integral functions’ we are usually thinking of a relation between two functions, in virtue of which one is the derivative of the other. And when we are considering a ‘definite integral’ we are not as a rule concerned with any possible variation of the limits. Usually the limits are constants such as \(0\) and \(1\); and \[\int_{0}^{1} f(x)\, dx = F(1) – F(0)\] is not a function at all, but a mere number.

Since \(1/x\) is continuous for all positive values of \(x\), the investigations of the preceding paragraphs supply us with a proof of the actual existence of the function \(\log x\), which we agreed to assume provisionally in § 128.

158. Area of a sector of a circle. The circular functions.

The theory of the trigonometrical functions \(\cos x\), \(\sin x\), etc., as usually presented in text-books of elementary trigonometry, rests on an unproved assumption. An angle is the configuration formed by two straight lines \(OA\), \(OP\); there is no particular difficulty in translating this ‘geometrical’ definition into purely analytical terms. The assumption comes at the next stage, when it is assumed that angles are capable of numerical measurement, that is to say that there is a real number \(x\) associated with the configuration, just as there is a real number associated with the region \(PpqQ\) of Fig. 47. This point once admitted, \(\cos x\) and \(\sin x\) may be defined in the ordinary way, and there is no further difficulty of principle in the elaboration of the theory. The whole difficulty lies in the question, what is the \(x\) which occurs in \(\cos x\) and \(\sin x\)? To answer this question, we must define the measure of an angle, and we are now in a position to do so. The most natural definition would be this: suppose that \(AP\) is an arc of a circle whose centre is \(O\) and whose radius is unity, so that \(OA = OP = 1\). Then \(x\), the measure of the angle, is the length of the arc \(AP\). This is, in substance, the definition adopted in the text-books, in the accounts which they give of the theory of ‘circular measure’. It has however, for our present purpose, a fatal defect; for we have not proved that the arc of a curve, even of a circle, possesses a length. The notion of the length of a curve is capable of precise mathematical analysis just as much as that of an area; but the analysis, although of the same general character as that of the preceding sections, is decidedly more difficult, and it is impossible that we should give any general treatment of the subject here. 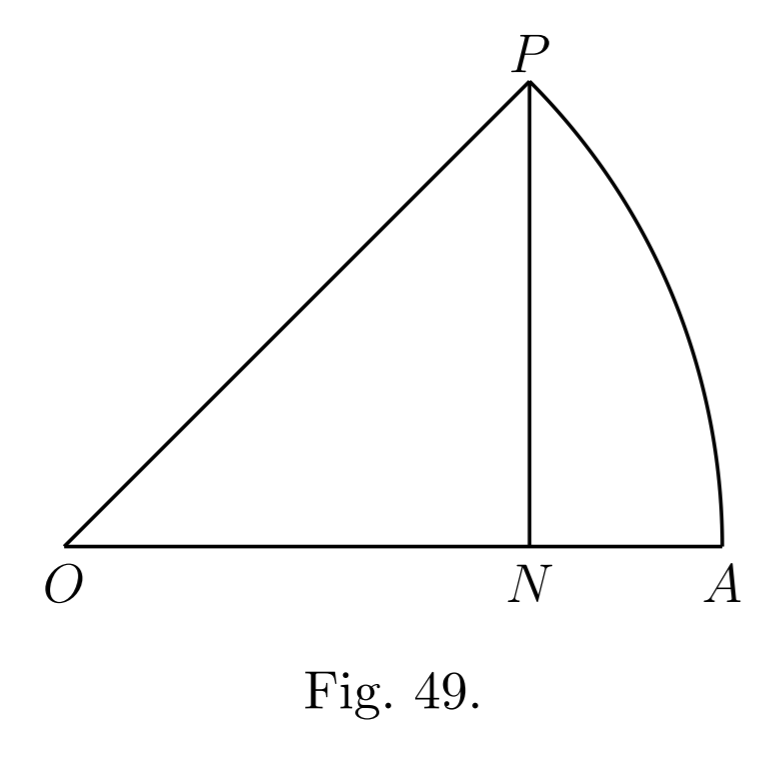 We must therefore found our definition on the notion not of length but of area. We define the measure of the angle \(AOP\) as twice the area of the sector \(AOP\) of the unit circle.

Example LXIII. Calculation of the definite from the indefinite integral.

159. Calculation of the definite integral from its definition as the limit of a sum.

In a few cases we can evaluate a definite integral by direct calculation, starting from the definitions of §§ 156 and 157. As a rule it is much simpler to use the indefinite integral, but the reader will find it instructive to work through a few examples.

160. General properties of the definite integral.

The definite integral possesses the important properties expressed by the following equations.3

This follows at once from the definition of the integral by means of the integral function \(F(x)\), since \(F(b) – F(a) = -\{F(a) – F(b)\}\). It should be observed that in the direct definition it was presupposed that the upper limit is greater than the lower; thus this method of definition does not apply to the integral \(\int_{b}^{a} f(x)\, dx\) when \(a < b\). If we adopt this definition as fundamental we must extend it to such cases by regarding the equation (1) as a definition of its right-hand side.

The reader will find it an instructive exercise to write out formal proofs of these properties, in each case giving a proof starting from (\(\alpha\)) the definition by means of the integral function and (\(\beta\)) the direct definition.

The following theorems are also important.

We have only to observe that the sum \(s\) of § 156 cannot be negative. It will be shown later (Misc. Ex. 41) that the value of the integral cannot be zero unless \(f(x)\) is always equal to zero: this may also be deduced from the second corollary of § 121.

This has been proved already in § 145, but it is convenient to restate the result here as a formal theorem. It follows as a corollary, as was pointed out in § 157, that \(F(x)\) is a continuous function of \(x\).

1. Show, by means of the direct definition of the definite integral, and equations (1)-(5) above, that

\(m\) being an integer. [The truth of these equations will appear geometrically intuitive, if the graphs of the functions under the sign of integration are sketched.]

161. Integration by parts and by substitution.

The formulae for integration by parts and for transformation often enable us to evaluate a definite integral without the labour of actually finding the integral function of the subject of integration, and sometimes even when the integral function cannot be found. Some instances of this will be found in the following examples. That the value of a definite integral may sometimes be found without a knowledge of the integral function is only to be expected, for the fact that we cannot determine the general form of a function \(F(x)\) in no way precludes the possibility that we may be able to determine the difference \(F(b) – F(a)\) between two of its particular values. But as a rule this can only be effected by the use of more advanced methods than are at present at our disposal.