Let us return to the consideration of the properties which we naturally associate with the notion of a curve. The first and most obvious property is, as we saw in the last chapter, that which gives a curve its appearance of connectedness, and which we embodied in our definition of a continuous function.

The ordinary curves which occur in elementary geometry, such as straight lines, circles and conic sections, have of course many other properties of a general character. The simplest and most noteworthy of these is perhaps that they have a definite direction at every point, or what is the same thing, that at every point of the curve we can draw a tangent to it. The reader will probably remember that in elementary geometry the tangent to a curve at \(P\) is defined to be ‘the limiting position of the chord \(PQ\), when \(Q\) moves up towards coincidence with \(P\)’. Let us consider what is implied in the assumption of the existence of such a limiting position. 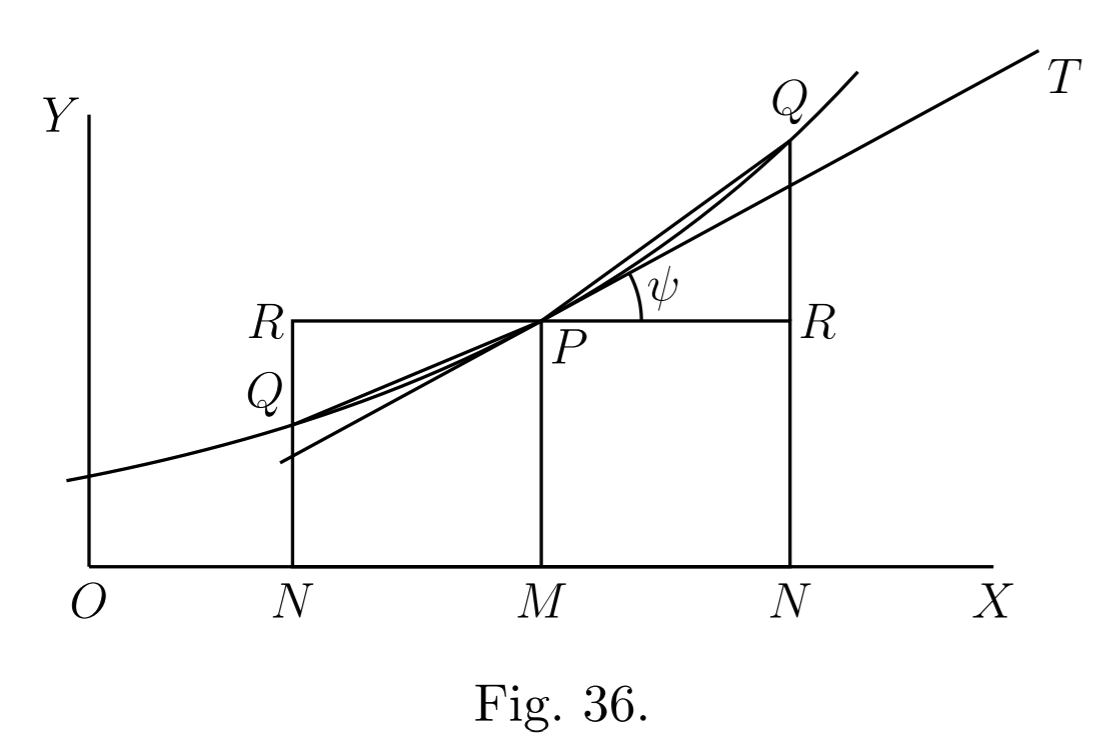 The reader should be careful to note that in all these equations all lengths are regarded as affected with the proper sign, so that (e.g.) \(RQ\) is negative in the figure when \(Q\) lies to the left of \(P\); and that the convergence to the limit is unaffected by the sign of \(h\). 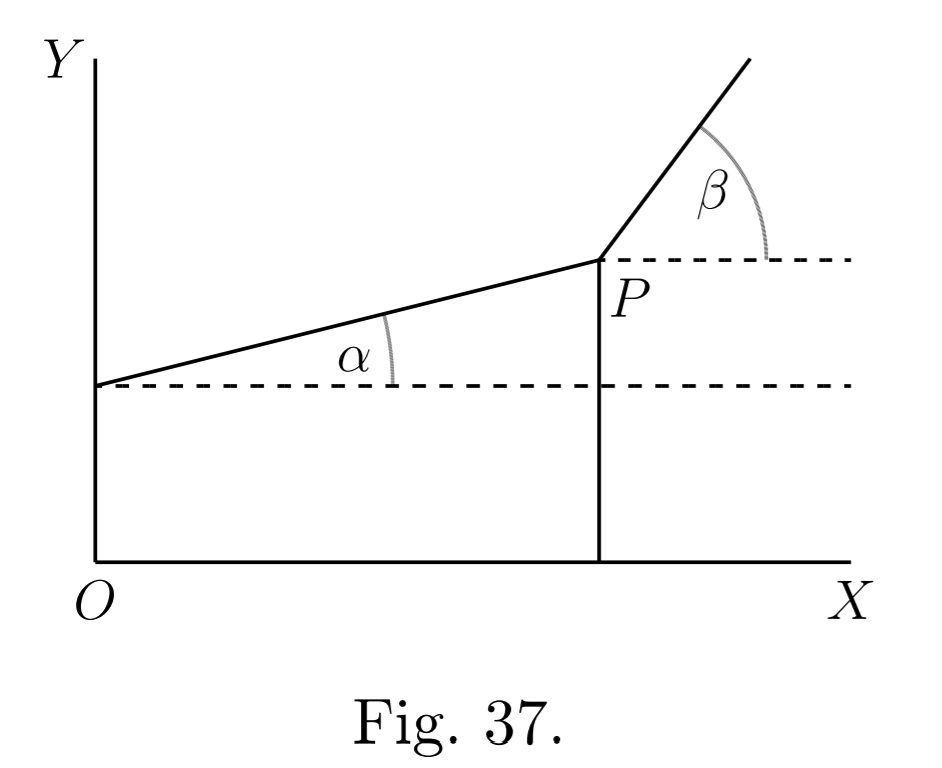 Now let us suppose that the curve has (like the circle or ellipse) a tangent at every point of its length, or at any rate every portion of its length which corresponds to a certain range of variation of \(x\). Further let us suppose this tangent never perpendicular to the axis of \(x\): in the case of a circle this would of course restrict us to considering an arc less than a semicircle. Then an equation such as (1) holds for all values of \(x\) which fall inside this range. To each such value of \(x\) corresponds a value of \(\tan\psi\): \(\tan\psi\) is a function of \(x\), which is defined for all values of \(x\) in the range of values under consideration, and which may be calculated or derived from the original function \(\phi(x)\). We shall call this function the or derived function of \(\phi(x)\), and we shall denote it by \[\phi'(x).\]

Before we proceed to consider the special case mentioned above, in which \(\psi = \frac{1}{2}\pi\), we shall illustrate our definition by some general remarks and particular illustrations.

(2) It is natural to ask whether the converse is true, i.e. whether every continuous curve has a definite tangent at every point, and every function a differential coefficient for every value of \(x\) for which it is continuous.1 The answer is obviously No: it is sufficient to consider the curve formed by two straight lines meeting to form an angle (Fig. 37). The reader will see at once that in this case \(\{\phi(x + h) – \phi(x)\}/h\) has the limit \(\tan\beta\) when \(h \to 0\) by positive values and the limit \(\tan\alpha\) when \(h \to 0\) by negative values.

It has even been shown that a function of \(x\) may be continuous and yet have no derivative for any value of \(x\), but the proof of this is much more difficult. The reader who is interested in the question may be referred to Bromwich’s Infinite Series, pp. 490–1, or Hobson’s Theory of Functions of a Real Variable, pp. 620–5.

(3) The notion of a derivative or differential coefficient was suggested to us by geometrical considerations. But there is nothing geometrical in the notion itself. The derivative \(\phi'(x)\) of a function \(\phi(x)\) may be defined, without any reference to any kind of geometrical representation of \(\phi(x)\), by the equation \[\phi'(x) = \lim_{h \to 0} \frac{\phi(x + h) – \phi(x)}{h};\] and \(\phi(x)\) has or has not a derivative, for any particular value of \(x\), according as this limit does or does not exist. The geometry of curves is merely one of many departments of mathematics in which the idea of a derivative finds an application.

Another important application is in dynamics. Suppose that a particle is moving in a straight line in such a way that at time \(t\) its distance from a fixed point on the line is \(s = \phi(t)\). Then the ‘velocity of the particle at time \(t\)’ is by definition the limit of \[\frac{\phi(t + h) – \phi(t)}{h}\] as \(h \to 0\). The notion of ‘velocity’ is in fact merely a special case of that of the derivative of a function.

We saw also in Exs. XXXVII. 7 that the types of discontinuity which occur most commonly, when we are dealing with the very simplest and most obvious kinds of functions, such as polynomials or rational or trigonometrical functions, are associated with a relation of the type \[\phi(x) \to +\infty\] or \(\phi(x) \to -\infty\). In all these cases, as in such cases as those considered above, there is no derivative for certain special values of \(x\). In fact, as was pointed out in § 111, (1), all discontinuities of \(\phi(x)\) are also discontinuities of \(\phi'(x)\). But the converse is not true, as we may easily see if we return to the geometrical point of view of § 110 and consider the special case, hitherto left aside, in which the graph of \(\phi(x)\) has a tangent parallel to \(OY\). This case may be subdivided into a number of cases, of which the most typical are shown in Fig. 38. In cases (c) and (d) the function is two valued on one side of \(P\) and not defined on the other. In such cases we may consider the two sets of values of \(\phi(x)\), which occur on one side of \(P\) or the other, as defining distinct functions \(\phi_{1}(x)\) and \(\phi_{2}(x)\), the upper part of the curve corresponding to \(\phi_{1}(x)\). 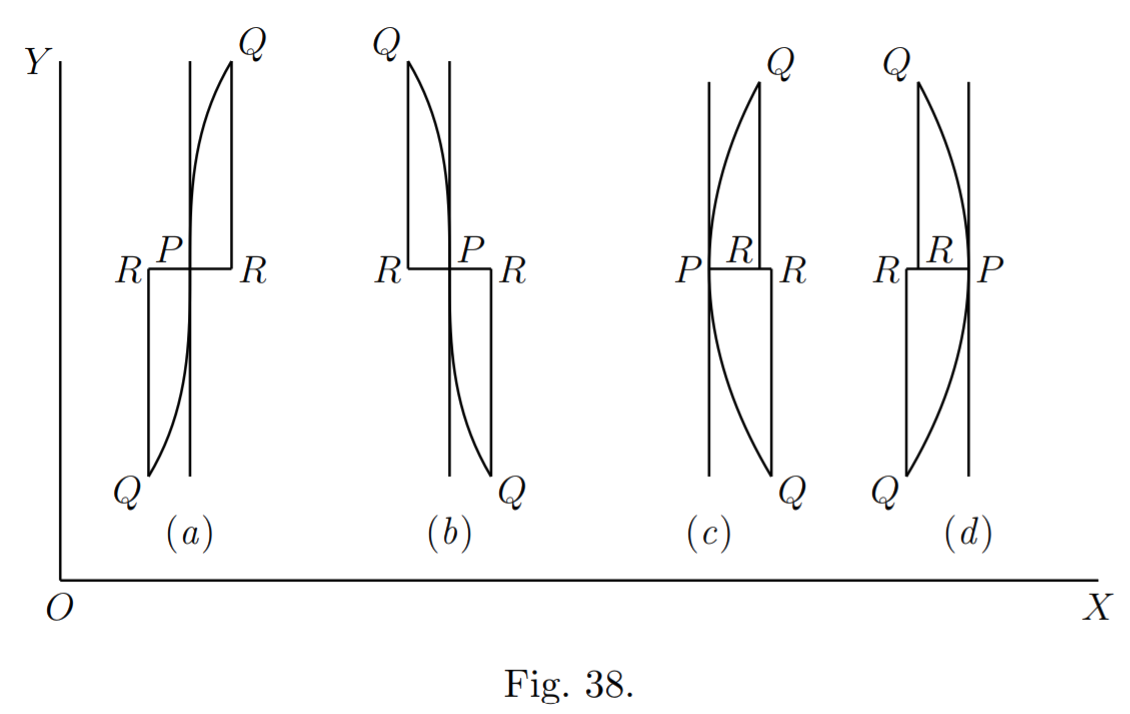