In space of three dimensions there are two fundamentally different kinds of loci, of which the simplest examples are the plane and the straight line.

A particle which moves along a straight line has only one degree of freedom. Its direction of motion is fixed; its position can be completely fixed by one measurement of position, by its distance from a fixed point on the line. If we take the line as our fundamental line \(\Lambda\) of Ch. I, the position of any of its points is determined by a single coordinate \(x\). A particle which moves in a plane, on the other hand, has two degrees of freedom; its position can only be fixed by the determination of two coordinates.

A locus represented by a single equation \[z = f(x, y)\] plainly belongs to the second of these two classes of loci, and is called a surface. It may or may not (in the obvious simple cases it will) satisfy our common-sense notion of what a surface should be.

The considerations of § 31 may evidently be generalised so as to give definitions of a function \(f(x, y, z)\) of three variables (or of functions of any number of variables). And as in § 32 we agreed to adopt \(f(x, y) = 0\) as the standard form of the equation of a plane curve, so now we shall agree to adopt \[f(x, y, z) = 0\] as the standard form of equation of a surface.

2. Three linear equations in general represent a single point. What are the exceptional cases?

4. Cylinders. What is the meaning of a single equation \(f(x, y) = 0\), considered as a locus in space of three dimensions?

5. Graphical representation of a surface on a plane. Contour Maps. It might seem to be impossible to represent a surface adequately by a drawing on a plane; and so indeed it is: but a very fair notion of the nature of the surface may often be obtained as follows. Let the equation of the surface be \(z = f(x, y)\).

If we give \(z\) a particular value \(a\), we have an equation \(f(x, y) = a\), which we may regard as determining a plane curve on the paper. We trace this curve and mark it \((a)\). Actually the curve \((a)\) is the projection on the plane \(XOY\) of the section of the surface by the plane \(z = a\). We do this for all values of \(a\) (practically, of course, for a selection of values of \(a\)). We obtain some such figure as is shown in Fig. 17. It will at once suggest a contoured Ordnance Survey map: and in fact this is the principle on which such maps are constructed. The contour line \(1000\) is the projection, on the plane of the sea level, of the section of the surface of the land by the plane parallel to the plane of the sea level and \(1000\) ft. above it.1 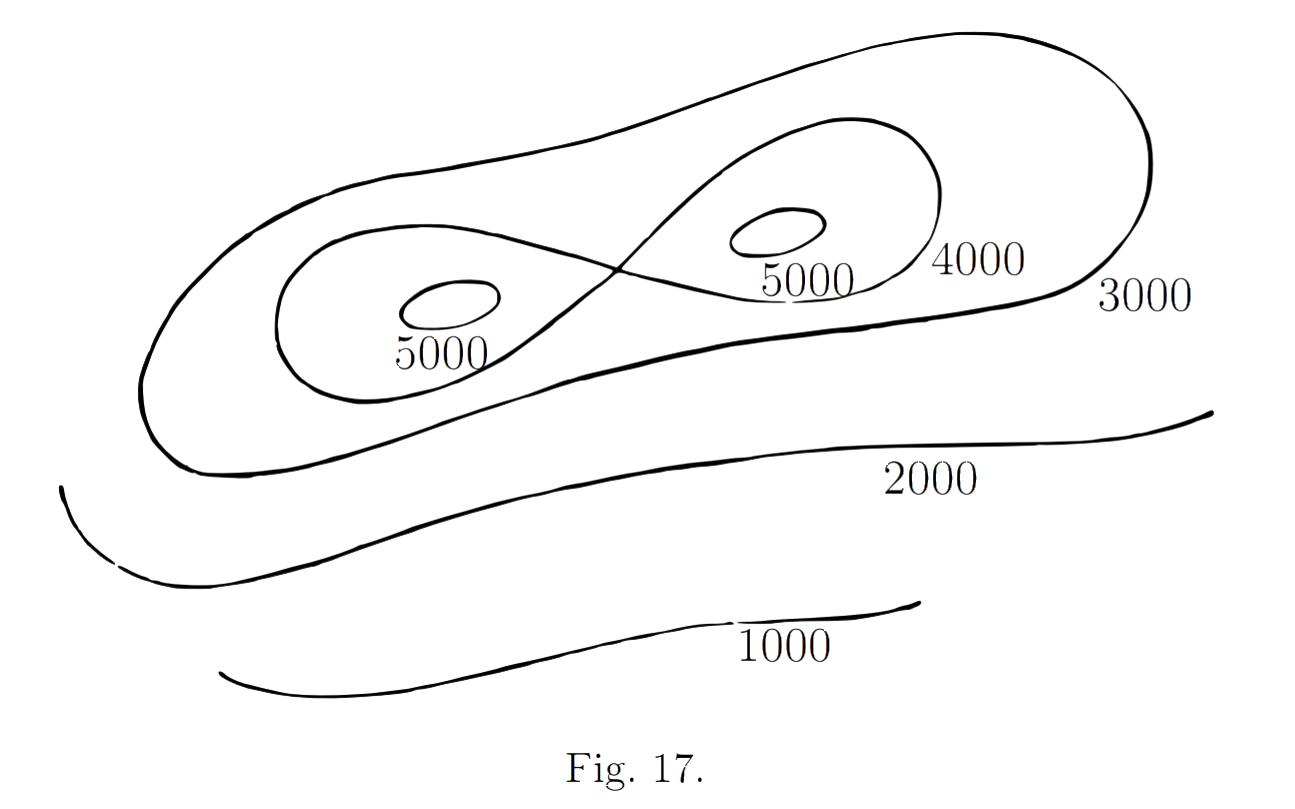 10. Ruled surfaces. Cylinders and cones are special cases of surfaces composed of straight lines. Such surfaces are called ruled surfaces.

Another simple example of a ruled surface may be constructed as follows. Take two sections of a right circular cylinder perpendicular to the axis and at a distance \(l\) apart (Fig. 18a). We can imagine the surface of the cylinder to be made up of a number of thin parallel rigid rods of length \(l\), such as \(PQ\), the ends of the rods being fastened to two circular rods of radius \(a\). 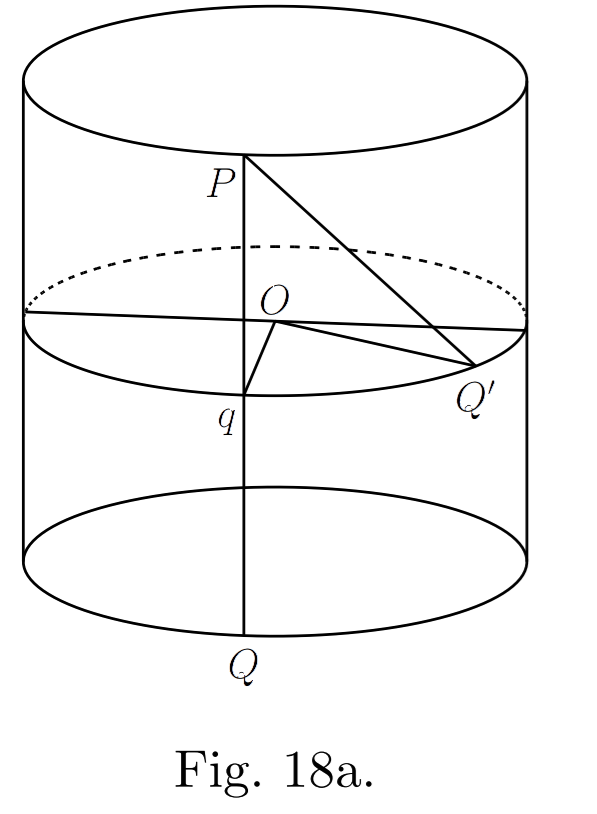 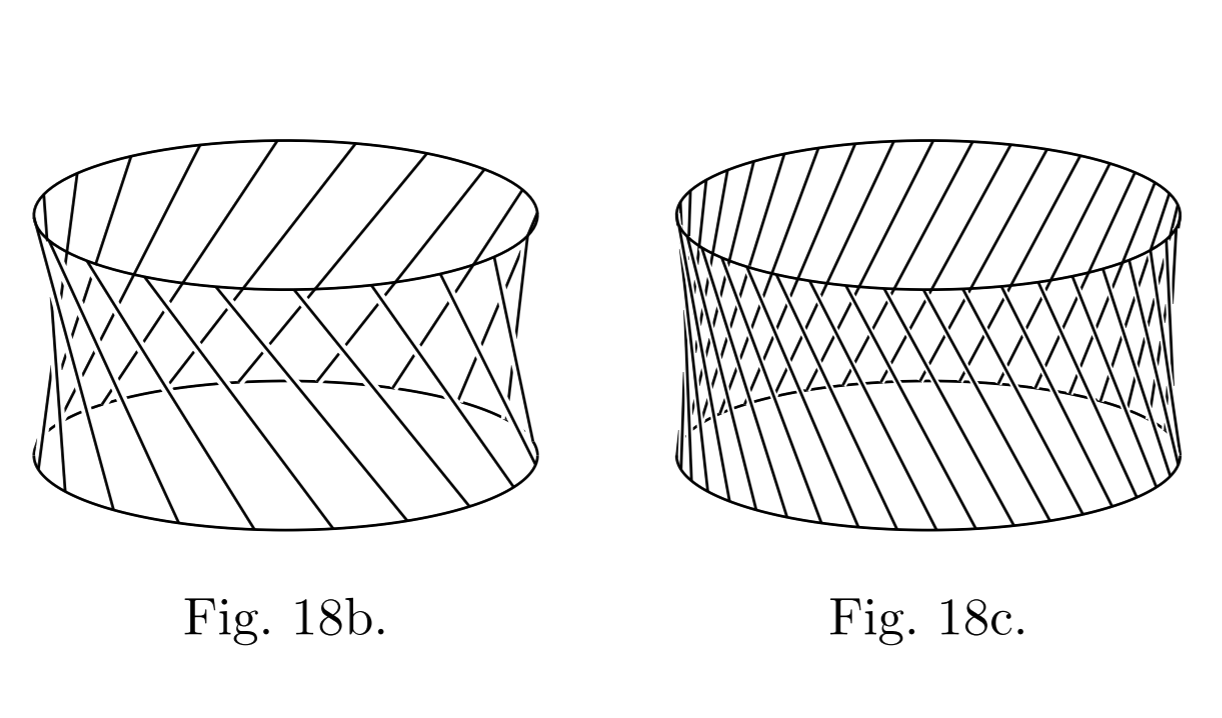